Listening to plants while they listen to us. 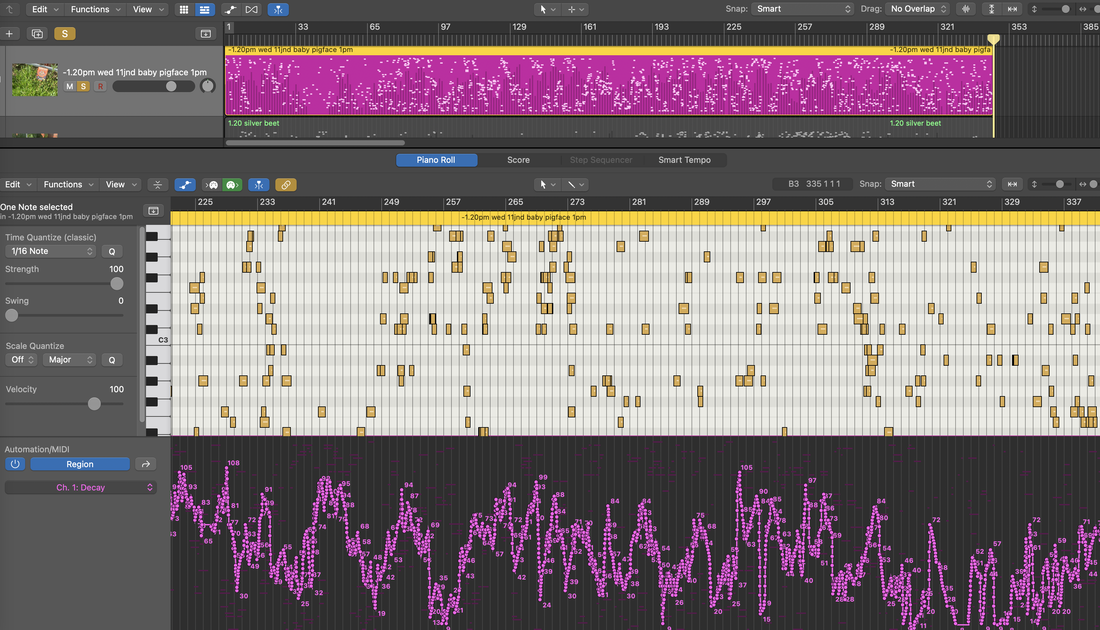 ​Audio Visualising Changes in Conductivity of  Plants.
There have now been many decades of experiments, research and just recently even quite popular domestic consumer items that can sense changes in conductivity in plants and translate these into visual or audio signals for music or data analysis.I have been using the MIdiSprout and Plantwave devices invented and made by DataGarden. DataGarden answers the question "What exactly is being measured" as "microfluctuations in conductivity between two points on a plant. The amount of conductivity between these two points is largely related to how much water there is between them. That changes as plants photosynthesize and move chloroplasts around."

From the examples below I think it is easy to see some differing patterns for each plant with very few moments of unison or simultaneity across all plants and there are definite patterns of rapid and quieter energy. You may see these  patterns as meaningless constantly random fluctuations, "stochastic"-non repeating non-linear patterns, indicators of plant stress or health, or as changes in energy, even perhaps ascribe human like moods or feelings , or use these to point to all  plants as having their own signatures or characters.  I do not know if the relatively inexpensive technology I am using is that precise or accurate, or totally free from all sorts general signal noise/interference and there are way too many variables  for me to confidently predict or interpret what is causing the flow and changes in conductivity.

As a non-scientist I am however, still satisfied that this is an interesting reminder that we are not alone in being alive and important. In other words what relations, energies or forms of consciousness and even perhaps communication/ or intersubstantive affect,  exist within and between lifeforms. As an artist I am interested in the implications and expressive use of this exploration. If there happen to be some direct or indirect practical applications and benefits of this approach, for instance benefiting people or plant health, that would also be a bonus.
Five 10 minute Midi Plant Data Recordings
Taken from  Art& Ecology Studio Planter box between 1 and 2pm in partly cloudy sunny day May 2022.
- Mostly  Indigenous Australian Food Plants.
2 Pig Face(large and “baby face” varieties)
Sea Celery
Sea Parsley
Native Grass
Silver beet

​
the distinct different patterns or phrases  and timings of  the pitches from each plant is most clearly shown in traditional music notation( but for the sake of comparing longer durations within one small image on the same page,  the tablature view following is more useful) 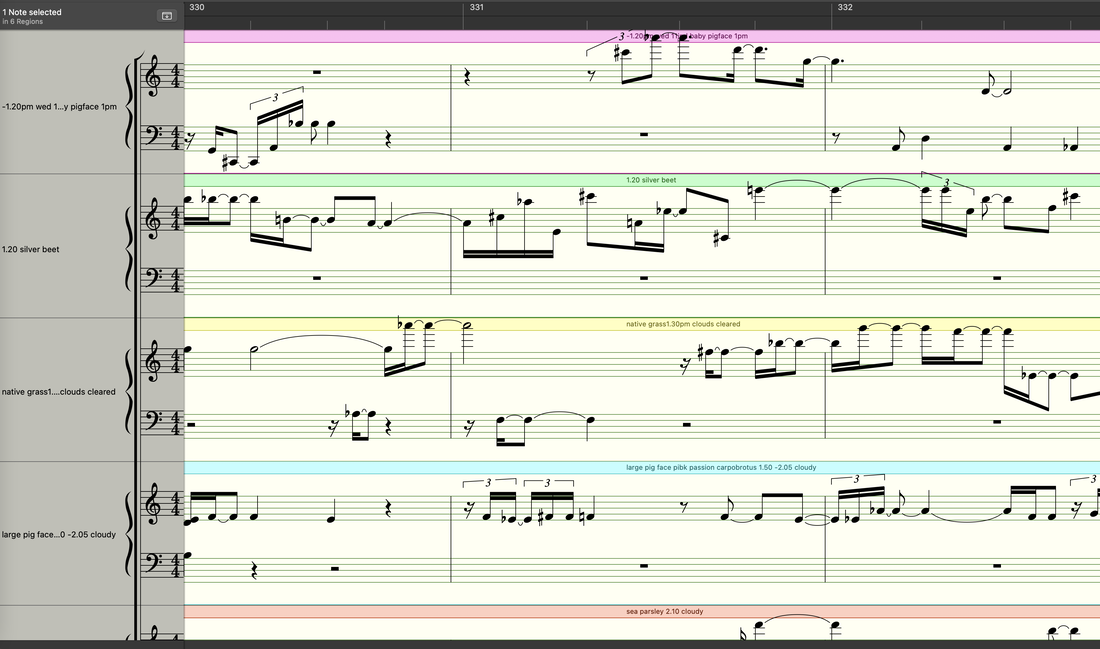 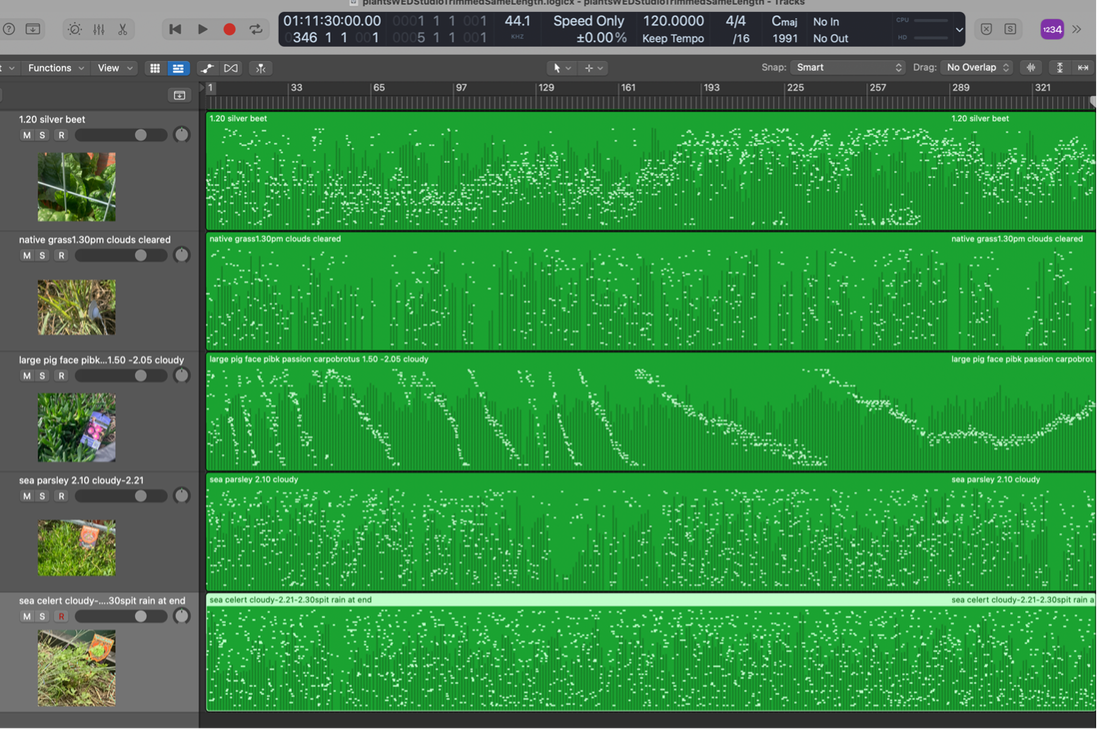 Note in these screenshots from a standard computer music program, each dark green row is an instrument's score with time going across the page from left to right,  the white dashes are notes from low at the bottom of each to high  in pitch at the top of each row( low pitch may equal a low voltage and high pitch a higher voltage). The grey bar graph represents their velocity/rate of change which can be used for  varying the volume, tonal or other audio effects of the sound.
NOTE "WHAT IS GOING ON HERE?"  In my understanding these signals from the plants are measuring changes in conductivity-like tiny different voltages and rates of change-this likely represents changes or movements in plant cell sap. From my reading even the single cells  of slime moulds can have fascinating 'behaviours' and chemical changes and charges.  Testing other liquids also produced various changes but for instance inserting metal probes into a lemon picked from a tree a few days ago had much less variation in notes(conductivity) than any of the living plant materials. Trying to understand the production of electricity, relationship between cells, chemistry and electricity took me back to basic high school and Burnley horticulture school, soil-science lessons. I will not do this body of knowledge a disservice by attempting to condense it into one malformed, ill-informed sentence here!


Close up view of two of these plants recorded 10 mins apart: -
​

another way to visualise and compare the five plant recordings using color code and viewing all together.. 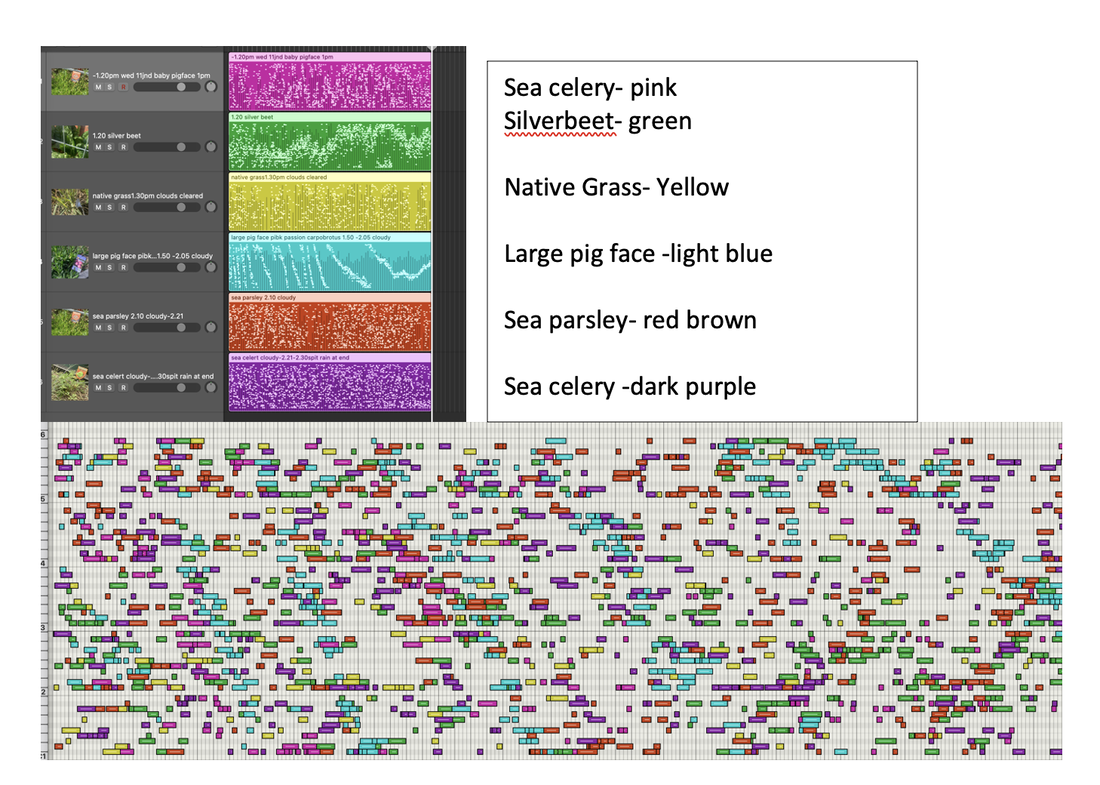 The above midi recordings mapped to the same 'orchestration'and limited set of notes for tonal interest.

But what does it sound like?
when the signal is recorded into the computer it is just data translated to pitch and volume information- how this is played by an actual musician, or in this case by a particular synthesised sound source, gives a lot of scope for shaping the sound according to any number of aesthetic or technical considerations . For instance getting these notes to be played by dreamy sounding bells or string orchestra sounds will obviously create a very different atmosphere to these same notes being played by electric guitars and  a sampler instrument made from recordings of chainsaws- However, even when getting the individual recorded notes to trigger rhythmic repetitions, chords or mini phrases, such as arpeggios. I can still hear something of the strange patterns and slow wave like changes of activity with occasional pauses still recognisable from the plant recordings.
​ 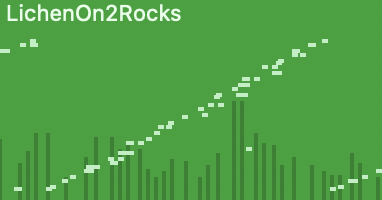 ​..catch a glimpse of Kangaroos retreating from midi plant sounds being recorded and broadcast in the forest...